Wow! A whole year has gone by since we've been blessed with Baby Elin! She has been such a joy in our home. She is sweet, and easy-going. She loves to follow everyone around, and is trying her hardest to keep up with the craziness of the Burkinshaw household. We are so lucky to have her with us! Things Elin has done in her short little life include walking, saying "uh-oh", shaking her head when she doesn't want something, drinking milk, eating almost everything and anything, playing "hide-and-seek", and climbing. She loves to climb the little table and the slide. She can almost get on the couch by herself. Elin is a busy little girl, but that's okay 'cause she fits right in! Well Elin, this is your life! 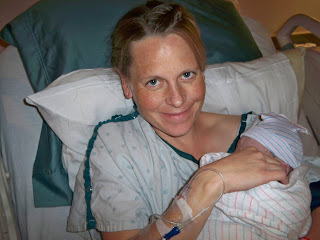 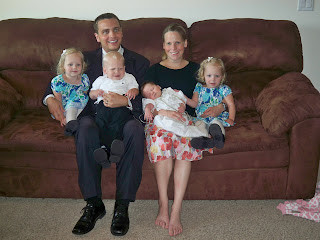 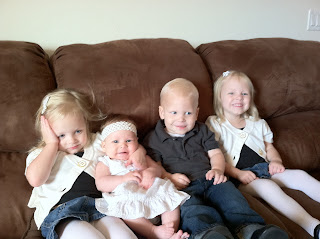 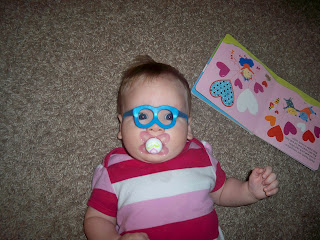 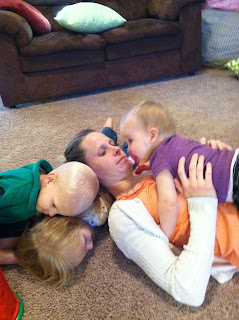 And, Paul and I celebrated our 5th wedding anniversary on the 27th--Ice cream and a movie after the kids were asleep.
Posted by Molly at 9:24 PM 5 comments:

Paul is out for the evening for Elders Quorum stuff, and the kids are asleep. I haven't posted for a while for a lot of reasons. 1. Nothing terribly exciting has happened. 2.My camera gets confiscated anytime I get it out, as well as my phone. 3.The camera no longer takes pictures. I think it's because the button has been pressed too many times...(Aislee...grrhh) 4. We were out of town for about a week. I'd attempt to take the hundreds of pictures we took off my phone, but Paul takes it with him when he goes out. So, yeah...pictures to come. But, we'll do a recap.
Elin is weaned. It took me a while to decide whether or not I wanted to wean her. She's been walking for over 2 months, and pretty much doesn't need me for sustenance. She's also been getting a lot of teeth (8). She bit pretty hard one day and I decided that it was enough (11 months and 11 days). She was pretty mad at me the next few mornings. But, I've actually had none of the side-effects I've had before with weaning. I think it was about time. She eats well, and is drinking whole milk with everyone else. It was easier since she wouldn't take a bottle, and was stealing everyone's sippy cup anyway. Elin has started saying "uh-oh" when she drops things. She lets me know when she is done eating by throwing all of her food off of her tray piece-by-piece. She gets pretty frustrated when she can't pick every toy up in her arms and carry them around the house. I always think she's hurt when she wails. Really, she's just lying on the floor with her stuff piled around her. She gives me this look like, "I'm trying, but I just can't...!" She is cute, and sweet and always in the mood to cuddle. Elin is just like the rest with her severe separation anxiety. Some days, it takes her a few minutes to warm up to Paul. Other days, she can't wait for him to put his stuff down before she runs to his legs. We can't wait to celebrate her first birthday in a few weeks (as well as our 5th anniversary).

Ewan is...Ewan. Our attempts at getting rid of the darn pacifier were failures. Latex balloons work a ton better than the non-latex ones when trying to "send the pacifiers to babies who need them". Just FYI! So, we let him keep it for the trip. Upon our return, I'd find him sneaking fixes in his room. So, it's gonna be gone soon! Funny story...The girls call him "Ew-Ew" (like you-you). It was just him and me for a few minutes one day, and we were playing the Name Game. I had a family picture and he was telling me who everyone was. I asked him what his name was. He said, "Me-Me!" So, we've been working on "EWAN". He knows, now. We're also working on his L's so that he can say E-Lin, instead of E-Rin. Ewan is just fun. He loves cars, trucks, trains, and planes. He loved being able to go outside with the Uncles and jump on the trampoline. He's been talking about them and when he gets to see them next. Uncle Joel comes home in June, and we are all so excited for his return! Ewan is my cleaner. Anytime I'm vacuuming, sweeping, wiping, or picking up he is right behind me. He also likes to have a wipe by his plate so he can wipe his hands and mouth in between bites. OCD? Probably...a little bit. He gets it from both of us...sorry, kid!

Aislee is our little photographer. She's taken hundreds, maybe even thousand of pictures on the camera and phone. She has good days where they're not all of her head. And, that my friends is why our camera no longer works. We plan on getting a new one soon, but we don't have time to talk about getting one, let alone researching and then shopping for one! Aislee is also the little mother. She likes to take good care of Elin, and makes sure Elin is not left behind by carrying her around the house. It's a good thing that baby is so easy-going! Aislee is a sweetheart. She loves to sit on my lap while watching a show and snuggle with a blanket. She tells me that I'm the best mom ever when I refill her milk sippy. We are so glad she's in our family.

Whoever coined the phrase the "Terrible-Twos" did not have three-year olds! Not that I'm complaining, but my goodness! they can get into some trouble some days! Olivia seems to be the leader for most mischief. I was helping Aislee in the bathroom, Elin was playing with toys in the dry-tub, and Ewan was sitting on the counter "brushing" his teeth. I thought Olivia was coloring in the living room. She was coloring alright! I thought I heard her get on the counter in the kitchen, so I finished up in the bathroom, and ushered everyone out to find that Olivia had pushed a chair to the counter, climbed onto the counter, and somehow got into the cake decorating things. She had food coloring all over her pink and white striped shirt. I asked her what she was doing. Her reply, "I was helping you get ready for my birthday party, Mommy. I'm a big helper!" with a grin. Cold water, vinegar, laundry detergent, and a 20 minute soak got it all out. I think 3 year olds are harder because they CAN do things, but haven't quite grasped the SHOULD/SHOULDN'T aspect of agency. Olivia is very cute, quick to say Sorry, and give kisses. It's a good thing, too!

Paul is busy. Some days we see him for a few minutes before bed. Other days we see him the next morning for prayers. Yes, he's busy. He is now into his second course of a ten course program. I know I probably shouldn't be counting down this soon into the program, but I'm a numbers and dates person. For some reason it helps! We really enjoyed our trip to Utah because Paul was with us the whole time. He didn't have class, homework, or work. It was just nice to have him there. Another set of arms is always a plus! We're looking forward to the middle of May when his summer starts! We have some projects we want to get done before he starts back up in August. We may have already started training for a big race together come December.

I don't really consider myself "busy". It's a different type of busy. There's a lot of sweeping, mopping and pick up involved in my busy. I also get paid in hugs and kisses! Yes, the occasional (frequent) sticky smear, snotty nose, or soggy Goldfish may cause a wardrobe change mid-day (I should host an award show), but I am grateful for the opportunity to be at home. Paul has been good enough to give me some time to "fill the well" because motherhood can sometimes drain it. It's been nice to catch up with friends, run, read, sew, and yes, shop. Maybe, I should start blogging more also...! Other than using my new-found stain removing skills, we are all doing well.
Posts to come...Aunt Sarah's wedding...! YAY!
Posted by Molly at 9:52 PM 3 comments: