What's in a name?

Paul and I haven't really chosen names for our kids that are very common...well, Olivia may be number 3 on this year's top 100 baby names, but the rest of them aren't even on the top one-thousand. Anyway, we've been asked a lot lately how we've come up with our kids names. We will be the first to admit that naming a baby is a hard thing. They're going to be called that for the rest of their lives, pretty much. That's a lot of pressure for a parent. And, when you settle on a name and you tell someone, they sure have an opinion about it! For the last two, we've kept our "ideas" to ourselves for the most part. We usually knew what the middle name was going to be long before the first name. We feel it's important to honor those who will/have a significant influence on us and our children. Here are the stories on how we came up with their names. 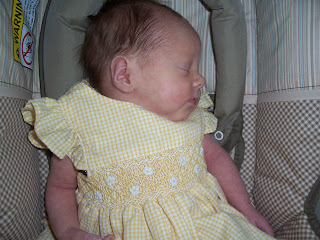 Olivia Christine: For our first date, Paul and I went to a concert called Guitars Unplugged at BYU. I'm kind of sentimental and, since we were engaged and still at BYU a year after our first date, I wanted to go to Guitars Unplugged again. One of the guys that sang the previous year performed a song called Olivia. It was about his niece and how full of energy and bubbly she was while he was babysitting her. This song was a lullaby. I'm kind of a sucker for acoustic guitars, so I loved it! Paul bought me the CD, so we have it if anyone wants to hear our inspiration. Olivia's middle name, Christine, is my oldest sister's middle name (Megan Christine). After she passed away, I knew I wanted to use it as a middle name. 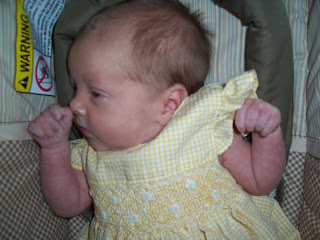 Aislee (Aze-Lee) Maureen: I'm the fourth of ten and the youngest girl, which means that I have 6 younger brothers. Talk about a lot of names to come up with! All ten of us have Irish names because my mother has strong Irish heritage. My mom had a few girl names waiting in the wings just in case...and she hasn't gotten to use them. One happened to be "Aislee". It's a Gaelic name similar to Ainsley and Ainsling. They mean "hermitage in or at the clearing or wood". We liked the sound of Aislee. We paired it with my mom's name which is my middle name. After the twins were born, I was at a department store shopping with my mother-in-law and sisters-in-law when I heard a woman calling for "Aislee". I went over to her with the twins and introduced myself (very uncommon for me!) and introduced my little girls. Her Aislee was two, and she had a four year old named Olivia. Weird, uh? Side note:With the twins, they were officially named after the BIG ultrasound. We were told after that ultrasound that they wouldn't be moving around (like switching sides) much so I could name them according to what side they were one. Olivia was on my right and Aislee was on my left. 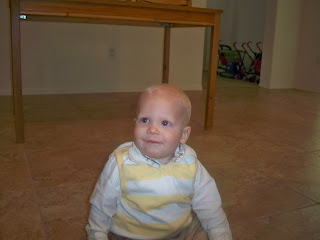 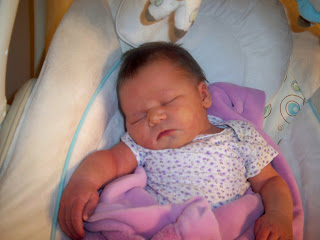 Elin (Ee-lin) Stacey: This one was also kinda hard. We had two names that we had pretty much settled on, but we both liked one of them over the other. Paul was calling her one name and I was calling her the other name. There may have been a little brain-washing with the other kids for names. Also, a few people thought the baby was a boy after we told them one of the names as an option. Paul didn't really like that so much. After going to the hospital the first time, Paul decided that we really needed to settle on a name. Once again, we knew the middle name, Stacey, which is Paul's mother's name. We both agreed on Elin, which is Scandinavian for "light" or "knowledge". Now that we have to pay for college for four kids, she better be full of a lot of knowledge and get a scholarship!
Posted by Molly at 2:14 PM 3 comments:

And then there were six...! 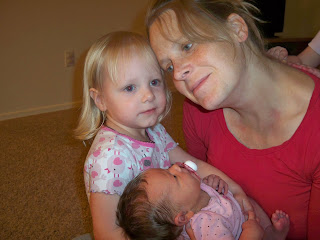 So, we're here at home, by ourselves. My mom went back on Friday to give us some time to adjust to being a family of six. It's been a little bit of an adjustment. The girls love to hold Elin! I think once the novelty of the new baby wears off, I'll be able to feed her without them wanting to help so much. I'm glad that they're excited about her rather than not wanting her around. She has a safe place similar to Ewan's, but now the twins are a little better equipped to get to her. They get a  little nervous when she starts to cry and ask me to help her get quiet. Ewan gets interested for a few minutes, but then goes back to what he was doing. It's probably a good thing. Paul went back to work today. It hasn't been too bad so far. Elin sleeps a lot! She's pretty easy-going when the kiddos want to hold her. She's pretty quiet when she's awake, and really only cries when she gets a cold wipe on her bottom or while getting a sponge bath. We're still trying to coordinate nursing, but she's a good eater when she does. Elin does pretty well during the nights. She gets up twice, eats, gets a diaper change and then goes back to sleep without a lot of trouble. I seem to sleep better after the baby comes than the previous weeks leading upto delivery.We're doing okay. We're looking forward to Grandma Stacey's visit on Thursday, and miss Grandma Maureen. Thanks for the visit!