Things have been a little busy this month. It seems that as Christmas approaches, things get busier and busier! We're looking forward to visiting family, and enjoying some time together. We've really enjoyed winter in Arizona so far. We spend mornings playing at the park in short-sleeves, weekends having picnics, and evenings sitting on the porch watching shooting stars and drinking hot chocolate (vanilla for me). We had our ultrasound on the 17th to see how our little person is doing. Things look good! We're excited to open all the boxes of little GIRL clothes we've had stored. This little girl will be able to have a "blow-out" and replace her outfit with the same one! We have two names on a list...hopefully we'll figure this out before she arrives! We're now counting down! YAY!
Here are a few pictures. Sorry, they're a little mixed up!

What's in your tummy? 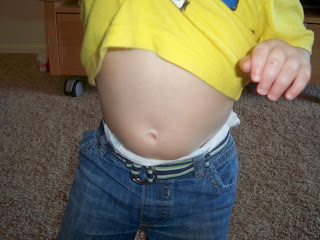 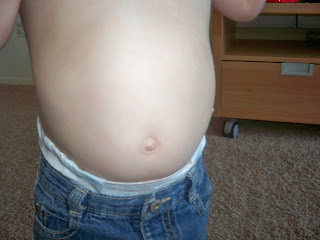 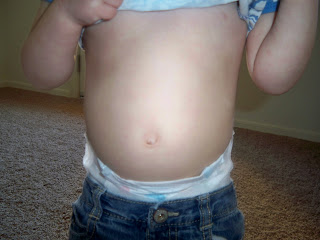 We've been talking a lot about tummies lately. We talk about putting good things in our tummies like apples, carrots, noodles, bread, milk, cheese, apple juice, eggs, chicken, fish, and rice. The girls can tell you the things they have in their tummies after a meal. It's kinda fun to ask Olivia if she has a monkey in her tummy. She looks at me funny (the you're-so-silly-mommy-look) and says, "No...monkeys not in tummy." While we talk about things we put in our tummies that make us feel good, and things that we may put in our tummies that make us feel not-so-good, the twins like to show their tummies and point to where the good things are. They understand that when they eat the good things (sometimes, I just want them to eat something!), they're able to play and run around. When they eat not-so-good things, they just want to lay all over Mommy, and it makes her very tired. We talk about Ewan's tummy too, and all the good things he has in his tummy. Aislee is usually the first to lift his shirt and say, "Baby milk!" He drinks a lot of milk! We talk about Daddy's tummy and what he eats while he's at work. It's usually left-overs from the night before, and maybe a couple cookies. They're starting to figure out what's in Mommy's tummy. It's not just food...

It's a BABY! Yes, we are expecting #4! We're very excited and looking forward to the arrival of this little one. We're due May 3rd. Ewan is very interested with babies at Church, and the girls' baby dolls. He gives them hugs and kisses and says, "ba ba". He's going to be a very good big brother. He also needs a buddy to help him when the girls gang up on him! When we told the girls that there was a baby in my tummy, they both started lifting up my shirt and trying to see where it was. I told them that the baby was stuck inside. Olivia leaned her head down to my stomach and yelled, "Get out! Get out baby!" This pregnancy has gone a little bit better than the last two. I was able to run the half-marathon at 8 weeks without too much trouble. My OB put me on the same medicine because I'm having a hard time drinking water and keeping some things down. I'm just kinda tired and 8 o'clock doesn't seem to come fast enough some nights! I'm very grateful for a husband who can get the girls to bed while I rest! I'm in charge of the baby who puts himself to sleep (muwahhaha!). He's also very good about getting up with them in the middle of the night and the early, early mornings! We're a little nervous about 4 in 2 1/2 years, but they will be such good helpers and buddies, it's also exciting! Like we said earlier, it's just gonna get busier! 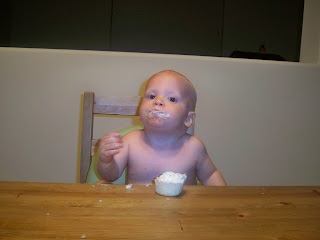 Ewan is one! It's amazing how time flies when you're busy. It feels like just yesterday we brought him home to meet the girls. Since yesterday was his special day, I'll kinda of introduce you to our little man. I've told many people that he is the perfect baby. That sounds funny, but he is. Ewan slept through the night at 3 months, he's always been a good eater, and is relatively easy-going. He's starting to become a little pickier now that he's learned he doesn't have to open his mouth for everything mom tries to feed him. Ewan has been walking for about a month. He loves following the girls around the house as they push strollers. He's really my little buddy and will come and sit with me whenever I'm on the floor. He likes to be held when I'm in the kitchen 'cause he knows I'll give him some food to keep him happy while I'm cooking or cleaning. Naps and bedtime are pretty slick with this little guy. I'll rock him for a few minutes and lay him in his crib. He may cry for a minute, but he's usually out within 3. Ewan loves spending time with Paul. He gets pretty sad when Paul leaves in the morning, and when he hears the garage door open, he heads straight for the door. He gives good hugs. He's learning kisses. His word is "uh-oh", which is more because I say it a lot to the girls than to him. Ewan really doesn't get into a lot of trouble, or maybe it's the fact the sisters seem to be the ones doing it first and he's just there...? I love how Ewan almost always has a smile on his face. He get s big grin when I say, "Ewan McGrewan, what you doin'?" and then comes running over to me. Aislee has started saying it with me. Ewan loves to be outside. We don't have much of a yard yet, but he'll stand at the door's window, gazing out at the open lot for quite some time. We have been so lucky to have such a wonderful, little boy in our family. The twins haven't quite figured out what to call him, but they often fight over "my baby" and who gets to give him a hug or a kiss. They're always wondering where he is if he's not in the room. Ewan is a joy in our home. We can't wait to see what his second year will bring!
Posted by Molly at 3:34 PM 2 comments:

Ashes. Ashes. We all fall down!

The kids like to have Paul play "Ring-Around-The-Rosies" before bed. It's pretty fun to watch. Ewan enjoys it, until the end.
Posted by Molly at 9:46 AM 1 comment:

I will admit that Halloween has never been my favorite holiday. I don't really like dressing up. I've never been a big fan of chocolate candy. And, I just don't like the whole ambiance of death and spooky stuff. Don't get me wrong, I am quite a fan of Harry Potter. But, Halloween was never something I got excited about. I like dressing my kids up, because they're adorable all dressed up. Not to put a damper on other people's fun for the holidays; to each his own. I do like Fall. I like long sleeved shirts and sweatshirts and not feeling like I'm gonna die if we're outside after 10am. So, Fall is good. We haven't gone out much lately because we've been having pretty early mornings which makes our nap schedule hard. Ewan has a morning nap around 8:30-9. The girls have been waking up at 5am, so they're ready for a nap at 11. And then Ewan takes his afternoon nap at like 1pm. Needless to say, I don't get much alone time right now. Today, however, the girls didn't fall asleep until 1. Kinda throws off our night time schedule, but I'm still gonna try to put them down around 7:30. Anyway, life is busy with three kids under three. I'm told it's only going to get busier.

Well, we're all moved in and settling into our new home. Thanks to family, we were able to get a lot of those annoying move-in things taken care of without a lot of fuss. Paul's parents drove back from Utah with me and stayed a few extra days to help install ceiling fans, kitchen hardware, and blinds. They also let Paul and I have a date, which was much needed.The trip to Utah went well. I finished the half-marathon with my dad and sister (Arianne got 2nd place and rocked the St. George marathon a few weeks later). I was a little sore and probably looked kinda funny walking around for the next couple days, but it was a good experience and I hope to do it next year! I got to attend my friend, Kamber's wedding. It was beautiful, and we're very excited to get to know Shane better. Paul packed and moved everything while I was gone which was very nice of him. I couldn't have packed while I was home with three kids unpacking faster than I pack! We've enjoyed more space, being closer to a more kid-friendly park, and the extra time we get with Paul now that we're 20-30mins closer! With all the extra space, Ewan had to learn how to walk pretty quickly in order to keep with the twins running around. He was getting so frustrated watching them run past him while he was crawling to wherever they were. He's not that fast, but he's getting there. The twins are adjusting well...kinda, they're still having a hard time staying in their bed the whole night. If we could get that taken care of, life would be just fantastic! We're looking forward to the cooler weather (we love Arizona falls and winters). 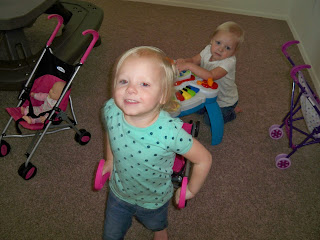 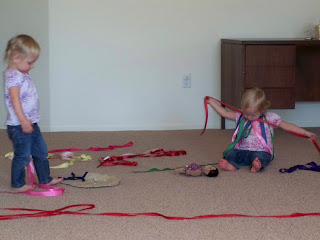 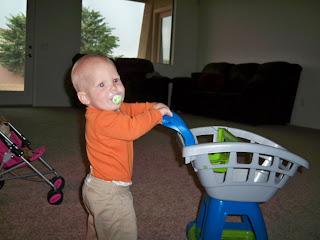 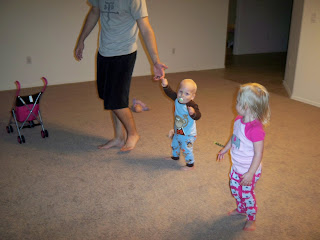 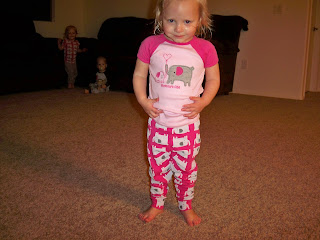 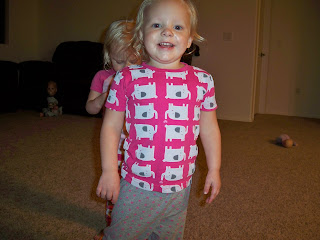 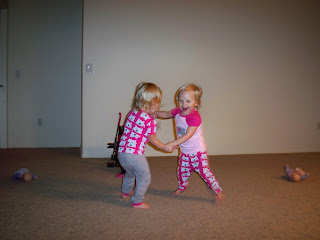 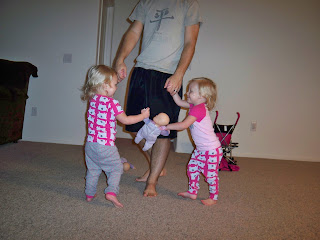 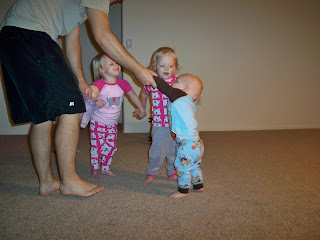 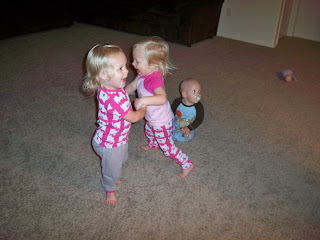 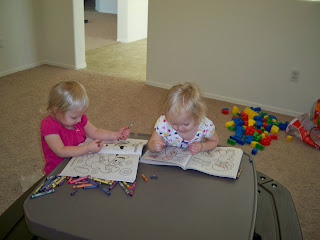 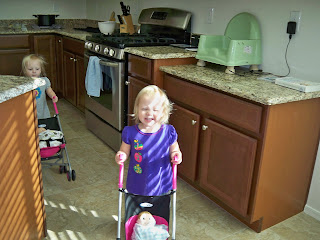 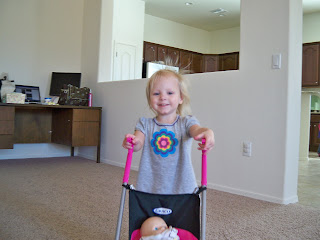 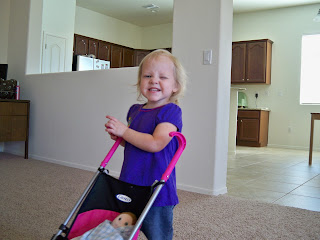 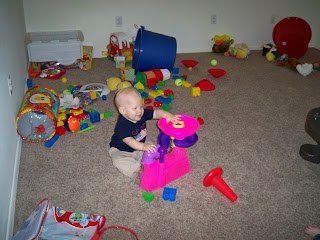 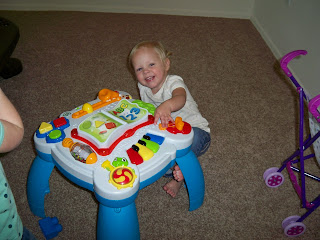